Side Effect of the Academic Crisis or Effect of Globalization? An International Brain Drain in the United States? 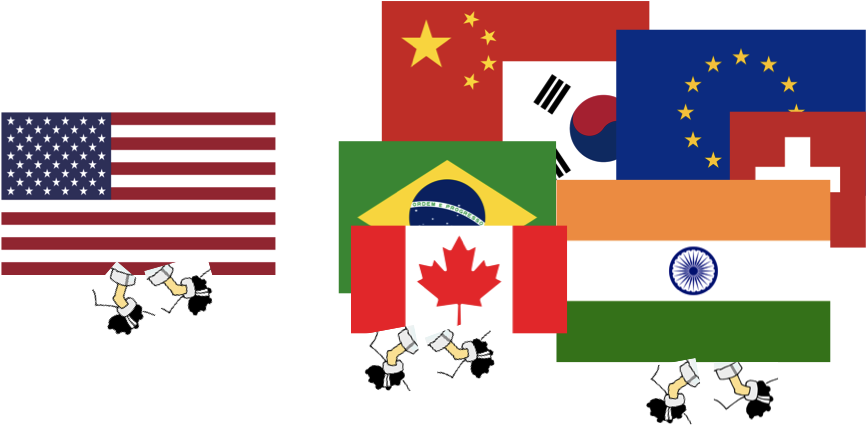 There’s a well-documented and discussed crisis in the biomedical enterprise in the United States. The average age of basic biomedical researchers receiving their first NIH R01 is 42. In the midst of this, the incentive for universities and research institutions to try to keep their graduate students and postdocs longer in their labs, with very small paychecks, is increasing. There is no question that the United States is the absolute leader in biomedical science but the current situation in Washington—if not changed—could put this leadership in jeopardy. Countries like China and India, which doubled their budgets in science and technology recently and provide high-quality basic math and science elementary education, pose a challenge to the research dominance of the United States.

Should all of this be treated as a domestic problem alone? The lower estimates indicate that 49% of postdocs in the United States are foreign and 20% of faculty were born outside the U.S. I believe that the lack of funding in the U.S. could create a migration of brains from the U.S. to other countries. James Rothman, professor at Yale, long time ASCB member, and a Nobel laureate, said during his talk at the 2013 ASCB Annual Meeting in New Orleans that this crisis could have serious consequences on American science leadership.

Limitations on staying in the U.S. are enforced by senseless immigration laws, allowing, for instance, a graduate student or postdoc to stay in the U.S. for six to seven years (sponsored by U.S. funds), and then be forced to leave the country after being trained but allowing the U.S. to reap none of the benefit. Most universities refuse to sponsor (i.e, pay for) green cards for postdocs (despite the interest of the international fellows to stay), which would be a way of keeping the knowledge and training in the U.S. Furthermore, a significant number of grants and fellowships in academia are for U.S. Nationals only, which makes life much harder for an international fellow or student. The power of internationalized science and collaboration is clear, but we should discuss whether the U.S. is suffering by letting creative scientists leave the country in an inverse brain drain, as happened with India and China during the ‘80s.

Countries like Argentina, Brazil, China, Chile, Colombia, and South Korea, among others, have very motivating and appealing “repatriation” projects, which aim to bring highly skilled postdocs back home to start a career, with salaries quite similar to (or even higher than) those in the U.S. China’s famous “Thousand Talents Program” offered thousands of dollars and fat salaries for researchers to return to China. Also, countries are funding their graduate students to study and do postdocs abroad if the students commit to return home after their studies. Brazil’s “Science Without Frontiers” program has 2,600 full-time, funded PhD students and 1,600 postdocs abroad, who will return to Brazil after their projects. Furthermore, there are multiple fellowships for visiting professors aiding international researchers in working in emergent countries. Things are not wonderful abroad—budget cuts in science and technology can happen in these countries anytime, and possibly the crisis in the U.S. could be repeated in these countries in the future. There is a significant increase in the numbers of PhDs and postdocs in countries like Brazil, India, and China; however, it is uncertain how well their internal markets will be able to absorb this highly qualified workforce.

For most of the researchers who left the U.S., one thing is essential: to be able to collaborate with their former U.S. institutions and colleagues. Regardless of the crisis in the facilities and structures, the quality of science in the U.S. is strong. Collaboration helps the repatriated scientist immensely. From sharing reagents and sending students abroad, to going to conferences, to researching together, science becomes stronger for both sides. After all, global networking makes the scientific enterprise stronger as a whole.

The question for the American scientific enterprise is: Should we keep letting them go? Of course competitiveness is a selective agent. However, when mass selection happens—and it is happening right now—questionable factors are used to evaluate quality (impact factor, for instance). With this, scientists funded by taxpayer dollars are noted by Rothman at the ASCB Annual Meeting), Americans are leaving the U.S. in search for better job opportunities in science.

As part of an international forum for cell biology (and the scientific policy behind it) we would like to hear from postdocs and students who have left the U.S. Tell us your story and the pros and cons of your experience! Leave your comments below.

Bruno Da Rocha-Azevedo is a Senior Staff Scientist in the Department of Biophysics at UT Southwestern Medical Center. Bruno studies the spatiotemporal dynamics of endothelial cell receptors using single molecule imaging. He was one of the founding members of COMPASS, and co-chair during 2015-2016. Bruno was the founder and co-chair of the Task Force on LGBTQ+ Diversity and currently is a member. Bruno also volunteered on the ASCB 5-year strategic plan, helping on creating the guidelines for further democratizing the society by ensuring leadership and decision making reflect the broad range of the membership and their interests and priorities E-mail: brunodarochaazevedo@gmail.com Twitter: @brunodra