PhD: Its Triumphs, Its Tribulations 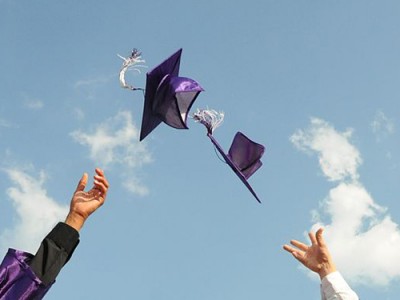 May is usually marked by the swarm of graduates waving their graduation hats in the air, ready to move on to the next phase of their lives. It is a very emotional and frustrating time for PhD students as their friends, peers, and colleagues embark on new opportunities in their lives, while we remain stagnated in our positions. Our lives are filled with an uncertainty and claustrophobic fear that our project may never succeed and our prime years have been wasted for nothing. However, we are protected from these fears with the assurance that we embody a select group of intellectuals who are using our inherent talents to move the world forward. Regardless, when we are left in the dust of people younger than us, who are venturing into new horizons, with better financial prospects than us, and more quality time to spend with friends and family, we start questioning our reasons for being in academia. “Graduation month” serves as a sudden, renewed reminder of our state of inertia compared with the graduates’ upward movement.

The requirement for completing PhD at most places is a first-author paper, i.e., a paper published in an accredited journal, where we are the primary contributors of the paper’s data. This first-author paper can be quite challenging to complete, especially in the biological sciences field. It is challenging because, first, it is difficult to obtain reproducible data from living organisms and their systems in an experimental setting. Second, we are essentially theorists who design experiments based on a hypothesis generated from an observed event (for example, we pick a gene that came up on a screen and generate a hypothesis about its function). In such a situation, there is always the possibility that the primary data that serve as the basis for generating our hypothesis might be only be an artifact. Finally, we usually work on multiple projects simultaneously, to have a fallback in case one of them doesn’t work out, and this consumes more time. These factors make the time to our degree not only an elongated affair, but also one filled with many uncertainties. I have been working on analyzing a novel role for a certain protein in the cell cycle, and after a year of experiments and failed hypotheses, I may finally have found an interacting partner of the protein. If I can validate this interaction and its significance with respect to the cell cycle with more experiments, I may be in line for a paper. However, that is probably another two years of experiments. Thus, it is no surprise that the average time to complete a PhD ranges from to 5 to 7 years. In conclusion, my life hangs on the success or failures of the next experiment, while my friends from other disciplines take their graduation walks and move on to the next phase of their career. When I envision the current state and timeline of my life with respect to theirs, it becomes extremely exasperating.

For all the aggravation I might feel now, I have been told that holding that PhD degree gives just as much satisfaction. A PhD student graduated from our lab last year and I remember his family tearing up as he and our PI went up on stage for his hooding ceremony. Doctoral students have a special and unique ceremony during graduation, called “hooding,” when the graduate’s PI puts a special hood on him/her to confer the Doctoral status. The title “Doctor” and the respect it governs, and finally being able to identify ourselves with intellectuals who have made great advancements for our world, definitely makes it all worth it. The next phase in a PhD’s career usually entails a postdoctoral position, where they do “real time” work as an independent researcher. Popular belief is that the amount of work done by a postdoc is not matched by compensatory financial returns. While this may be true, a postdoc experience serves as a training camp to become an autonomous leader. This training is worthwhile because it shapes us to become, for example, a Scientist II and project lead at a huge company, or associate professor at a university leading his/her own lab and scientific interests. Thus there are many benefits of a postdoc.

The position we can hope to be offered, subsequent to defending our PhD project, quite simply depends on the publishable quality of our research. This is also not in our hands, since, even after exhaustive work to ensure we have generated a testable hypothesis, the results we obtain may completely confound us. The results may show one of three things, either they were as predicted, or we get a result that is different from predicted outcome but holds space for further investigation, or finally, the worst outcome could be that we see a result that isn’t positive and holds no space for furthering our research. The first two cases are usually a victory as we can still move forward. However, for the last case, it’s usually back to the drawing board. Thus, we often don’t want to do a risqué experiment on the grounds that it will be more time-consuming and has a lower certainty of success. It is a catch 22: Do we formulate a hypothesis that requires more time and may never succeed, but, if successful has the possibility of being the next science breakthrough, with the accompanying career opportunities? Or do we go with an “incremental” hypothesis that may speed up our PhD, but isn’t a huge leap forward in science, and may not provide comparatively lucrative career opportunities?

In conclusion, PhDs on average spend at least five years working toward our degrees, and the factors contributing to that “elongated” timeline may vary, as described above. We have sufficient compensation, in the form of respect and recognition as an intellectual, and the satisfaction of being the people providing solutions for health and environmental problems. However, it is difficult to see the big picture when we slave away at the same thing for years and everyone else seems to pass us by. I suppose the only way is to wake up the next morning and believe that we will have our “May” as well.

Maisha Rashid is currently a PhD student in Cancer Biology, working on cell cycle regulation in as well as drug discovery in cancer. She is an avid writer for both scientific journals and newspaper articles, and advocates increasing science literacy for the general public. She has a strong interest in continuing research in cancer biology, and hopes to play a role in science policy and/or advocacy in the future. She can be reached via e-mail (Maisha.rashid@rockets.utoledo.edu) or on Twitter (@msrashid8).