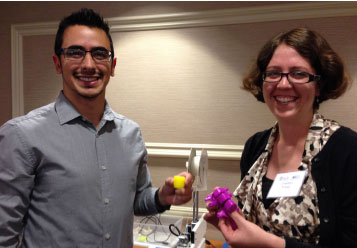 by to make a few remarks. Welcoming the 50 students from the United States and other parts of the world who attended the program at the KGI campus in Claremont, CA, Schuster joked, “Students become so enthusiastic that they sometimes think they can go out and start a business.”

Although they were fast learners, none of the students announced immediate plans to launch start-ups. But they did express abundant enthusiasm for both the new knowledge they acquired and the new network of friendships they made during the biotech course.

Midway through the program, on July 14, the New York Times coincidentally published a highly relevant article entitled “So Many Research Scientists, So Few Openings as Professors.”1 As the article noted “Now, as a new crop of graduate students receives PhDs in science, researchers worry over the future of some of these dedicated people; they’re trained to be academics and are often led to believe that anything else is an admission of failure.”

But, as president Schuster had already counseled the students attending the program, which ASCB co-sponsored for the third year, “Don’t let anyone tell you that working for industry means giving up science. Nothing could be further from the truth!”

That point was further underscored by Steve Casper, dean of the KGI School of Applied Sciences, who ran a session on Commercializing Science that set the stage for the rest of the course. Casper noted that although only 8% of available industry positions are in research, plenty of other positions need filling, in product development, project management, marketing and sales, business development, regulatory affairs, quality assurance, and other areas. In a world where only 8% of PhDs will get tenure at a university, preparing for a business career clearly makes sense for many scientists.

That was the case for postdoc Nyasha Chambwe of the Institute for Systems Biology in Seattle, WA, who was drawn to the ASCB-KGI program because “I’ve always had an interest in business, and the business of science, but I’ve never had any training.” She learned a lot, she says, including the important fact that just discovering a new medicine isn’t enough. To make treatments available, an effective marketing strategy is necessary.

Bioentrepreneurship Basics
Although the program offered a lot, Casper managed expectations. He informed the students that the one-week course would “not substitute for extensive management training,” such as students would receive in an MBA or Postdoctoral Professional Masters degree program. But, he said, it would introduce them to “the language and concepts of bioscience business,” using lectures on bioentrepreneurship, in-depth cases studies of problems typically facing bioscience businesses, and workshop-type breakout groups of small teams working on practical problems, such as whether to invest in a start-up.

Despite its brevity, the program gave third-year graduate student Ahsan Choudary of the University of Texas (UT) Health Science Center in Antonio, TX, “an opportunity to collaborate with people from across the country and learn some great skills” that will directly impact his work in a consulting firm he co-founded, Commercialization Catalysts. The firm collaborates with UT’s Office of Technology Commercialization and has prioritized 20 technologies that the company believes are ready to go to market. “What I really liked about the course was the fact that we have learned hands-on techniques that we can take back home with us” in the areas of market sizing, intellectual property, regulatory affairs, and other topics taught during the five days. “All of that is going to prove very helpful,” Choudary says.

Besides interactive academic sessions, students also worked in teams on a project using “Printbot” 3D printers. Under the guidance of Anna Hickerson, they used the printers to make medical implants for five diseases: infant tracheobronchomalacia, hip arthroplasty, genioplasty, shoulder osteoarthritis, and hyperscoliosis. Ten teams of five students each worked separately on assigned medical implants. They researched the relevant disease, its current treatment and market, and other matters necessary to make a decision about commercializing the implant. On the final day, they made presentations to panels of judges and recommended whether to invest in the 3D printable product. Two winning presentations were selected, with each winning team member receiving a large chocolate bar and cheers from fellow students. Every team received feedback.

Learning academic theory in the morning followed by the group 3D project in the afternoon when theory could be concretely applied was a training format that postdoc Alexandra Noel of Louisiana State University in Baton Rouge praises. Noel was drawn to the program’s interdisciplinary aspects as a way to gain a perspective on career possibilities that would merge her research degree with knowledge about “real world companies creating products or drugs that could really help patients.” She adds that the program “is definitely worth pursuing.”

Real-World Knowledge
Two high-profile keynote speakers and two networking lunches with business professionals contributed to the students’ real-world knowledge of the bioscience industry. Speaker Art Riggs told the story about his work with colleagues in Genentech that led to the first successful expression of a human gene in bacteria and producing the hormone somatostatin. He described the collaborative process that led to the company’s success after near failure and responded to very active student questioning. Executive coach and consultant Judy Heyboer, formerly the senior vice president of human resources at Genentech, provided pragmatic and frank guidance on how to succeed in business careers. She shared the research finding that the key to successful teams is “nice people” and discussed the importance of good mentors.

“The fact that the program presents a little bit of a lot of different things is the key for me,” says Vanessa Cox, a biochemistry PhD candidate at Georgia Institute of Technology. Having a consulting-type project to work on, together with case studies, as well as marketing and other classes, has been helpful, she says, providing not only academic knowledge but also personal insights regarding her preferences. “It’s confirmed where I’ll probably want to go”—into industry R&D as the foundation for a diverse career—Cox says.

Likewise for Stanford University first-year biochemistry postdoc Darshan Trivedi, who wanted to know how science actually is commercialized, “This was a perfect venue” to be introduced to the key business concepts. “Now we know the jargon,” he said, and can basically understand what is happening when business acquisitions or other industry events are reported. Trivedi noted that scientists often feel they will be looked down upon if they join industry, but “that’s where a lot of things are going now,” and taking the ASCB-KGI course “will certainly make you more saleable” to companies.