by Gabby Hayes and Christina Szalinski 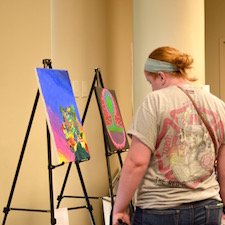 Art created by high school students after spending a day in the lab. Photo by Hillary Wilson

A 2015 issue of Nature reports that only about 26% of PhD students pursue tenure or tenure-track positions in academia once they acquire degrees. The figure highlights a growing problem in the scientific workforce—PhD graduates are floundering to identify a long-term career trajectory. These students have spent an average of five to seven years gaining skills and experience and conducting research, but still often find themselves asking, “What’s next?”

How can talented and creative students as early as high school get to experience scientific research, get a sense of themselves as scientists, and start to think about future career paths that match their interests and abilities?

At High Point University (HPU), Veronica Segarra, assistant professor of biology, and her research students, Casey Garr, Christina Budzinski, and Hillary Wilson, developed a program for just this purpose: EURICA (Emerging Undergraduate Research-Inspired Cell Art). This lab in North Carolina seeks to utilize early outreach programs to capture the attention of budding scientists as early as in high school in the hopes that the experiences will carry a long-term impact.

With the help of a COMPASS Outreach Grant, the first annual EURICA program took place at HPU. This program recruited high school freshmen from the local Penn-Griffin School for the arts and teamed them up with HPU biology students.

Through EURICA, students take science and apply it to their interests and niches. The aim of EURICA is to expand interdisciplinary science outreach to a population outside science, and to do it early.

Interdisciplinary programs like this are rare, but very important. As opposed to other science outreach programs that take place in places like museums and are aimed at an audience with an existing interest in science, this one targets an audience whose interests lie with art. By mixing these two interests, the program lends itself to the creation of completely original and innovative results and artworks. EURICA itself received the “Most Innovative Service” awards at a HPU service symposium. Programs like this are novel; they seek to not only engage the public with science outreach, but to engage students and foster career exploration.

If students are already talented in a subject such as art, a program like this can serve as a source of inspiration that can ultimately help the student to carve out a unique interdisciplinary career path in the future. Hopefully programs like this will ultimately help students solidify their interests early, aiding in career choices down the road. 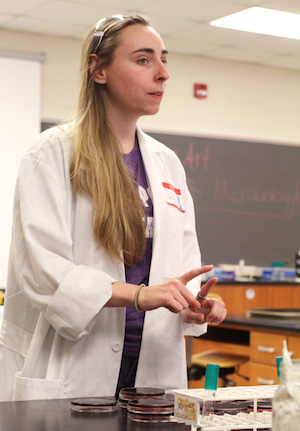 Gabby Hayes is a recent graduate of High Point University's Department of Biology. She graduated with a B.S in Biology with a minor in Statistics. She is originally from Asheville, N.C. In the fall, she will be relocating to the Research Triangle Park area in NC to pursue positions in science communication.Christina Szalinski is a science writer with a PhD in Cell Biology from the University of Pittsburgh.