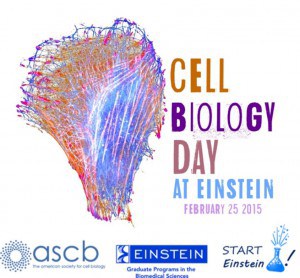 The event logo was also used as a keepsake sticker for the students. It was designed by Manar Charafeddine. Micrograph by Rabab Charafeddine.

February 25, 2015 was a special day at Albert Einstein College of Medicine, NY. For the first time ever, a group of 30 eighth graders from P.S. 89, a neighboring public school in the Bronx, visited the campus for “Cell Biology Day at Einstein.” I was nervous that morning, but seeing their excited faces as they entered the building calmed my nerves and made me realize that the hard part of planning and organizing is over, it was time to have fun! I remembered how just a few months ago, hosting them here, introducing them to scientists in their labs, showing them cells glowing under the microscope, and making model cells from Jell-O were just a bunch of muddled ideas in my head. These ideas eventually turned into a successful proposal for a COMPASS outreach grant and on February 25, a reality.

We all gathered in a conference room and the kids and their chaperones settled down after having some breakfast and putting on their nametags, which included their designated groups. They were happy to see the group names they had chosen weeks before represented on their nametags. We couldn’t have come up with better names than the ones they chose, which included “Magnificent Mitochondria” and “Wonderful Vacuoles,” not to mention dividing them into groups was a great help in planning the rest of the day. The animated chatter stopped and everyone was intently looking at Samer, another grad student and my partner in this event, and me. Samer was of tremendous help in conceiving and organizing this day. We stayed up late the night before, finishing up the mini-presentation we were about to give. We called it “Cells and Microscopes.” After welcoming them, we started talking about cells and their organelles, the different types of microscopes, fluorophores, and green fluorescent protein (GFP). The presentation was filled with images and movies taken by my fellow grad student volunteers, whom the kids got to meet later. It was an interactive talk and the students loved the comparison of a cell to a city we called Eukaryopolis. They were eagerly figuring out which department/plant represents which organelle. 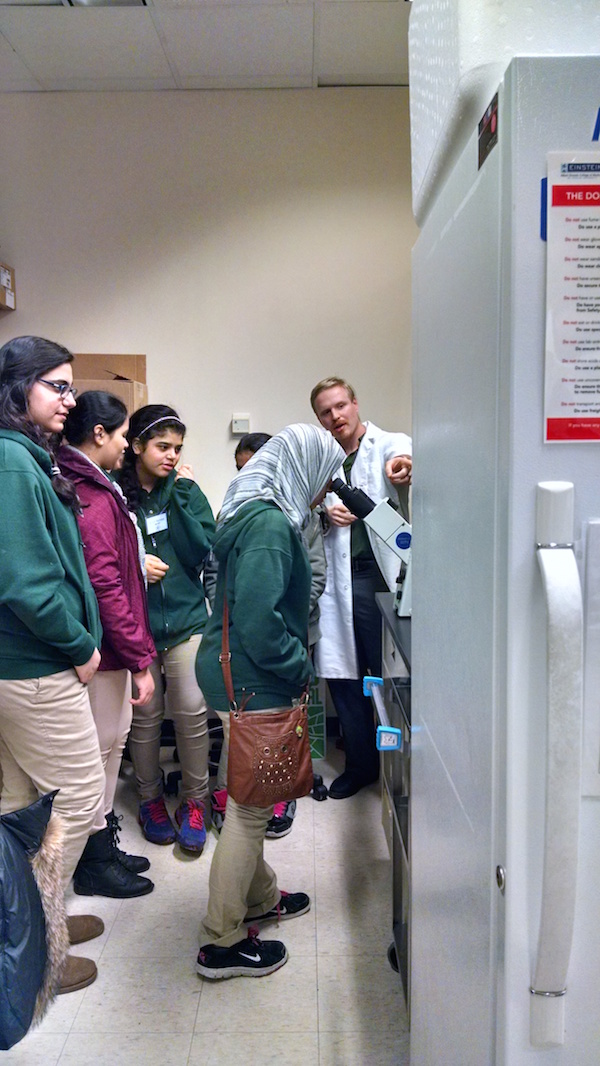 The “Awesome Atoms” examining tumor cells under the microscope with Dr. Charles Jenkins, a postdoctoral researcher at the Kenny lab. Photo by Natasha Chandiramani.

At the end of the presentation, we showed the schedule of the day: Each group would visit a different lab and would get to see different types of cells and/or animals under a fluorescence microscope. After that we would all have lunch with other scientists, and finally, we would be making cells out of Jell-O and candy. We had six labs hosting: the laboratories of Dianne Cox, David Sharp, Bernice Morrow, Erike Snapp, Florence Marlow, and Paraic Kenny. Interestingly, the kids were confused as to why the labs were referred to as the Sharp lab or the Marlow lab and so forth. So before we headed out with each group’s assigned usher, we explained to them the structure of a lab and how one becomes a scientist. Explaining graduate school to anyone, let alone to a bunch of 12-year-olds, is not a very easy task, but it was the epitome of why they were there. At the end of the day, we wanted to introduce them not only to cells and microscopes, but to the world of research and scientists.

The six groups went to their selected labs and met different principal investigators (PIs), postdoctoral fellows, and graduate students. This was their first time in a research lab, so other than not putting anything in their mouths, they did not know what to expect. In the Sharp lab, my group, the Nerdy Nervous System, were in silent awe about everything from the shakers to the -80 freezer. But soon after they saw bone cells under a light microscope, fixed neurons under a fluorescence microscope, and made a movie of live cells expressing microtubule end binding protein (EB1 linked to GFP) using a confocal microscope, their enthusiastic questions were endless. They wondered about basic concepts, like the reason why EB1 moves as a comet, as well as more complicated ones, like the hard-hitting “what do people do after graduate school? Do they all become PIs?” All the groups were exposed to diverse fields that introduced them to research in breast cancer, zebrafish development, murine heart development, macrophage phagocytosis, and the role of the Golgi apparatus. As we were heading back, I was worried that it might have been too overwhelming for them. Minutes later I was proved very wrong. 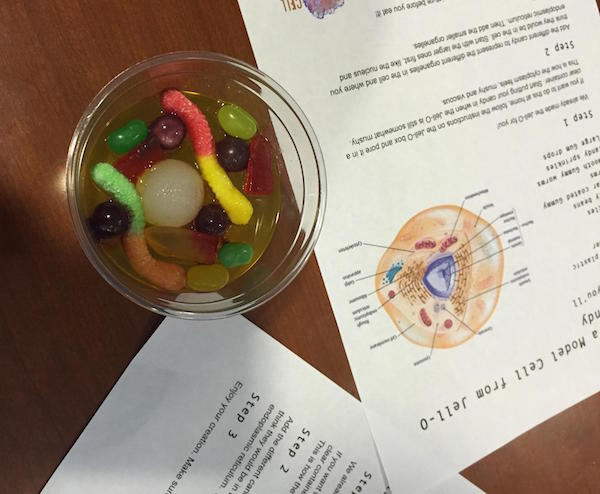 One student’s model cell creation from Jell-O and candy. Photo by Samer Hanna.

As we all gathered back for lunch with more graduate students and PIs joining us, I noticed something incredible happening. As the kids munched on their pizza, they animatedly shared their experiences with the other kids from different groups. They had so much to talk about—what they saw and who they met— that we didn’t need to ask them any questions. One student told Samer that it was very cool to actually see how and where experiments are done. Another chimed in saying, “We’ve learned about cells before but always through textbooks. Today we looked at actual cells under the microscope, and it was awesome!” Several revealed that they have always heard about Einstein but never really knew what was inside a lab. From their reaction it seemed like they were more than pleasantly surprised. But there was more to come: a harmonious chaos of building cells with Jell-O and candy would soon erupt.

We spent several hours the day before preparing clear cups with different colors of Jell-O. We divided the types of candy that looked like different organelles, but, not to hinder the kids’ creativity and to make it more fun, we didn’t assign them. As we were distributing the Jell-O cups and candy to the randomly formed groups, it proved to be a great idea. The kids were having fun making their cells and figuring out what organelles to put in next. Some were making plant cells, most were submerging their “organelles” in the Jell-O, but everyone wanted some sprinkles. The volunteers were having as much fun as the kids and told everyone to take a picture to share on Instagram with the hashtag #cellfie.

As the day came to an end, we thanked everyone for coming, all the volunteers for helping, and most importantly ASCB’s COMPASS for sponsoring the event. The kids giddily rushed out with mementos, stickers, and half-eaten model cells. That day was perfect. I was happy to be surrounded by cheerful eighth graders and everyone who helped see this through. Still the skeptic, I wasn’t sure if our message to the kids came across clearly. Weeks later, I received long thank you letters from every single student, detailing their experience and what they’d learned on their trip to Einstein. One student wrote, “Thank you for giving us the opportunity to experience how to work in a lab and for making learning fun!” and another echoed, “This experience has influenced me to take an interest in science as a major or a career. Seeing how hard everyone worked and how dedicated they were to their job was inspiring.” They all wrote with a sense of ease and familiarity about labs and scientists. One even wants to have his birthday party in a lab! As I finished reading the letters, feeling content and proud, I sighed, “They got it!”

Eighth graders from PS89, a public school in the Bronx, during Cell Biology Day at Albert Einstein College of Medicine. Photo by Bassem Khalil.

Rabab Charafeddine, MS, is a graduate student in the laboratory of David Sharp in the department of Physiology and Biophysics at Albert Einstein College of Medicine. She is the co-president of project START, a science outreach program at Einstein.