How Cell Biologists Work: Eva Nogales on making pictures of proteins worth a thousand words 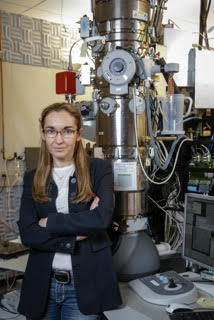 Eva Nogales is a Professor of Biochemistry and Molecular Biology at the University of California, Berkeley; a Senior Faculty Scientist at the Lawrence Berkeley National Laboratory; and a Howard Hughes Medical Institute (HHMI) Investigator. The Nogales Lab uses cryo-electron microscopy (cryo-EM) to visualize macromolecular protein complexes and gain insight into their biological functions. Cryo-EM is similar to X-ray crystallography in that it allows proteins and protein complexes to be viewed at the atomic or near-atomic resolution. However, whereas X-ray crystallography requires proteins to be crystallized prior to visualization, cryo-EM bypasses this step, immobilizing proteins by flash-freezing them in solution. The frozen complexes are then imaged using transmission electron microscopy, and the many 2D images are averaged and used to reconstruct 3D protein structures.  The 2017 Nobel prize in chemistry was awarded to three scientists who contributed to the development of this technique.

Nogales and a cryo-electron microscope at the University of California, Berkeley

The high-resolution structures Nogales and her team solve show how proteins come together to form molecular machines and consistently reveal novel aspects of how those proteins machines work. Currently, the Nogales lab is using cryo-EM to visualize the protein complexes at the heart of fundamental cellular processes, such as transcription and cell division. To better understand mechanisms of gene expression, the Nogales lab has characterized the structure and assembly of members of the transcription pre-initiation complex, a group of proteins necessary to activate gene expression, and the binding of repressive, non-coding RNAs to RNA polymerase II. Nogales solved the structure of tubulin in her postdoc, and her lab has continued to improve our understanding of microtubules by solving structures of tubulin polymers in different states of GTP hydrolysis and in complex with a variety of binding partners. Septins, the kinetochore, CRISPR-Cas complexes, and proteins involved in innate immunity have also come into better focus, thanks to the efforts of Nogales’ group. Nogales has been the recipient of many awards throughout her career, including being elected as a member of the National Academy of Sciences (2015), receiving the Mildred Cohn Award in Biological Chemistry (2015), and recently, being named as an American Society of Cell Biology Fellow (2017).

What kind of research do you do?

What is one word that best describes how you work:

What excites you most about your current work? 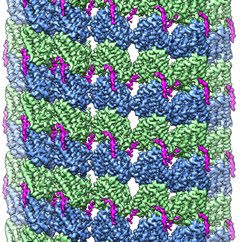 Cryo-EM structure of a microtubule (tubulin in alternating blue and green) bound to the mitotic, assembly-promoting factor TPX2 (magenta). TPX2 binds across tubulin interfaces using a flexible arrangement of motifs that allows it to interact with a rage of tubulin assemblies (Zhang et al., (2017) eLife.X)

Can you describe one experience from your life or training that set you on this path?

Meeting Ken Downing when in search of a postdoctoral position. I had previously worked on tubulin and done some primitive cryo-EM, but with him I learned cutting-edge methodology and used state-of-the-art equipment to get the structure of tubulin by electron crystallography. It energized me for life!

What is one part of your current position or project that you find challenging?

The drag of publishing. After we see and analyze our beautiful structures, convincing reviewers and editors of the value of those structures is terribly anticlimactic.

Do you have any specific advice about establishing or running a lab for new or aspiring faculty?

Surround yourself with lab members who are good team players. The genius loner is not worth as much in today’s science, and is definitely not as fun to work with.

I get so much done on planes! I turn on my noise-reducing headphones, pay for internet access, and answer all emails that have accumulated, and write papers, reviews, grants, grant reviews, letters of recommendation. Even read papers in detail (the final luxury!!)

Otherwise, the best shortcut is to delegate…

Besides your phone and computer, what gadget can’t you live without? And how do you use it?

My electronic reader, which I also use to play Sudoku (a habit that I got while trying to calm my nerves before an HHMI review…)

What is one thing you never fail to do (in or outside of lab), no matter how busy you are?

I can fail to do anything when things get really hectic. But, if not traveling, I really try to go to the gym every working day, first thing in the morning. It gives me a certain feeling of accomplishment that is great to face the rest of the day.

Who is one of your scientific heroes, and what is one quality you admire in that person?

There are many scientists that I look up to. One is Bob Glaeser, a colleague at Berkeley and the grandfather of cryo-EM. I admire his never-ending optimism, his creativity without limits, and his pure love of the scientific endeavor, without any interest in recognition or fame. It is quite refreshing. 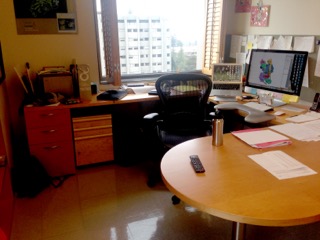 Nogales’ office at the University of California, Berkeley

What do you like to read, learn, or think about outside of lab?

I enjoy discussion over the dinner table with my family that covers anything from politics to history or science. I read mostly fiction, but I love cooking magazines. I have been learning to ski for the last few years, a late-life passion.

Are there any causes or initiatives in or outside of science that you are particularly passionate about?

In science, I believe very strongly on the need for support of basic research. In education, I wish for more affordable access to top universities for those who are now struggling to make ends meet, as I believe education is the true social equalizer.

I am an early riser. Often I wake up in the middle of the night and cannot go back to sleep, so I get up and try to get the day organized in my mind. I don’t think I have had an 8-hour night since my first pregnancy!

I really loved a comment that Carlos Bustamante (another colleague at Berkeley) made during the celebration of a symposium in his honor for his 65th birthday. He referred to how scientists, especially those at the top of their field, need to live with the frustration and self-doubt that comes from having to break new ground. We are testing our limits on a daily basis. If you feel like this, you are not alone and you may be onto something!

Jenny Heppert studies the cell biology of host-microbe interactions. She is currently a postdoc with Heidi Goodrich-Blair at the University of Tennessee. Twiiter: @hephephooray